So I herd u liek Christmas? Though more like, after-after-Christmas, seeing that Mr Mud was given away as a Secret Santa present and I didn’t want to spoil anything.

This is a handsewing tutorial that uses felt as the only material besides the stuffing. It’s a project I’d classify as ‘easy’. You should have a basic idea about how to hold a needle and a scissor though and having some felting experience is always an advantage, but this is a lot easier and faster than it looks. The only part that requires a bit more time is sewing together the different parts.

ATTENTION: There’s no pattern attached to this post as I didn’t use any except for the oval head base. I can upload patterns however that will be useful for other crafting projects as well.

First step! Cut out a large oval shape out of the medium blue felt sheet. Then I just folded the oval into half and cut out a light blue piece that is just half as wide as the darker one (plus removed the 2 little pieces on each side). This is going to be your head base. 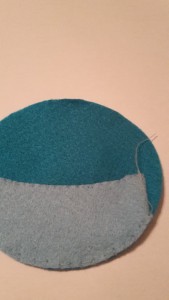 Sew both pieces together. I used a simple running stitch (as you can see on the picture) and then went through the whole shape again with an overcast stitch (http://media.web.britannica.com/eb-media/39/62839-004-E6DBA93F.gif) to finish the ends. But really all you need to do is sew the light blue smaller piece unto the darker blue larger one.

Eyes: I didn’t use a pattern here either and just cut out 2 bigger black ovals and 2 smaller white ones. You can pick any shape really and do round eyes, bigger eyes, etc. Stitch the white unto the black parts. 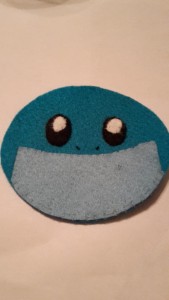 Add both eyes to the head base. For the nose, I simply did 2 small sewing stitches with black thread. 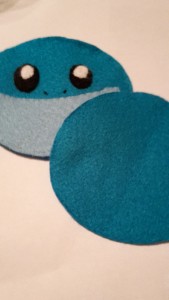 Now comes the stuffing part (or rather the preparation thereof). You need another medium blue oval piece that you just place on the other one. HOWEVER…

…here comes the trickier part: Right sides must face each other when you sew the pieces together. The eyes must face the INSIDES of the bunch. You’ll turn the whole thing around later on. So basically: Put the empty blue piece over the one with the eyes, sew ALMOST all the way around, leave out a gap and you’re good. The gap should be large enough to put 2 – even better: 3 – fingers through. 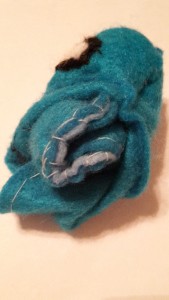 Now you should have a flat head shape. But to get a threedimensional figure and add the stuffing, we need to turn the whole thing inside out. Start from the gap you left out and push the whole figure aaaall the way through. Just push it and turn it inside out that way. 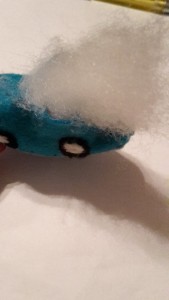 Mr Mud’s eyes should now have come into existence again.:D Now use the gap you left and add the stuffing.

Next are the gills on the cheeks. Now, I made a mistake here and made them blue, but the original Mudkip has orange gills. I basically cut out 4 small angel-wing-shapes. then sew them together 2 by 2. I used an overcast stitch to get a rather clean finish here. Then add a bit of stuffing… 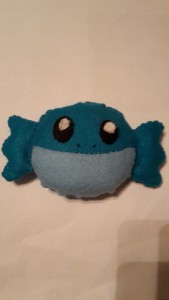 …and sew them unto the rest of the head. Your Mudkip should have its basic head shape now.:) To complete it, you can cut out a large fin in the same medium blue colour as the skin. But since it was a Christmas present, I added a santa hat and a scarf. 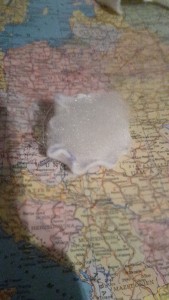 The santa hat is basically 2 large red triangles sewn together and filled with a lil bit of stuffing. I made the hat longer and higher so you can imagine Mudkip’s large fin fitting in.

For the pompom, cut out a small white circle. Sew all the way around, but this time about 1 cm away from the edges and also in a wide running stitch that you don’t tie into a knot, but just leave as it is! You can see how I did it on the picture: wide approximative stitches a bit further away from the edges. Fill with stuffing fibre. Then pull the thread that you didn’t tie into a knot yet so that the circle turns frilly (as seen above). Just pull the thread (gently) until you get a round fluffy pompom shape.

Add the pompom unto the red santa hat base, then sew the whole hat unto the head. 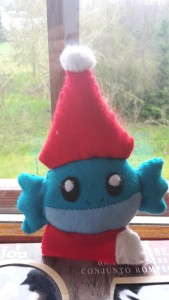 There! I also added a scarf which is basically 2 red rectangles sewn together.

Hope you enjoyed it!

Geeks Life writer & editor who likes Japanese street fashion, Touhou music and Love Live. Also a cosplayer under the name NozoMinaj and part of the cosplay unit Navigators. View all posts by Kotohime