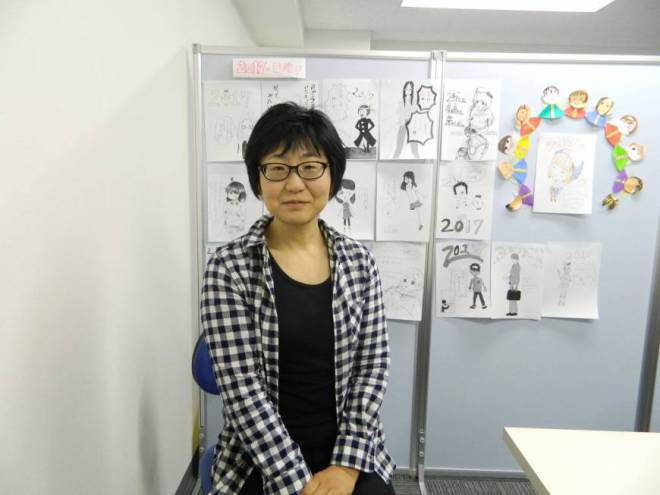 Nao Yazawa (谷沢 直, Yazawa Nao, born on July 29) is a Japanese manga-ka born in Tokyo, Japan. She discovered her passion for drawing already in her childhood and studied Chinese History before she got to publish her first manga arts.

She worked on several stories until 2000. One of the most famous was the shojo story Wedding Peach, which is about teenage girls becoming love angels and saving the world against demons. The manga was soon published as an animated series which has been very popular and loved by many fans until today.

In 2003, she released the shojo manga Nozomi, a story about a girl who makes a wish upon a falling star that leads her to a demon who teaches her about love. It was the first manga she drew for English readers.

In 2012, she began teaching classes on how to make manga in Tokyo as well as teaching overseas through Japan Foundation Toronto. In 2013, she published her autobiographical four-panel manga Go-Go Nao-P in English. Her most recent work is called “The isolated zone” which talks about a post-apocalyptic world.

At first, let’s talk about your current work.

2.   You currently teach manga classes. Have you noticed any differences between Japanese students and those overseas?

Yazawa-Sensei: Non-Japanese people have disadvantage compared with Japanese people. I think it’s because the time when they have started to read manga and the contents of their first manga. There are many manga for kids in Japan, simple and easy ones. Then it gets complicated, with sophisticated expression little by little, along with growing up. So many Japanese get basic method of manga without knowing, which non-Japanese people struggle to get sometimes. It’s especially clear the field of composing, storyboard (panel work) part.

3.   Your current work, The Isolated Zone, is very different from your previous ones. How did you come up with the plot? Do you have similar projects planned for the future?

Yazawa-Sensei: This is not my new work, rather old work – it is non-commercial work, started as Dojinshi. In a way it is my oldest work because when I started to draw the work, I was university student and it’s before my debut (although it is Dec. 2010 when I finished). So in a way, you can say it is my true taste. I made it just as a hobby – what I wanted to draw. (The very beginning, I did it for a doujinshi my friend started. It was focused on Fantasy/SF, so she asked me something Sci-Fi and that was my answer.)

I still have some more story idea about the series, or something similar. If there is no order/limit, I might make something like that. But I also love to draw light touch comedy, slapstick type gag, like I’m doing at Coffee Party project.

Now let’s focus on one of your most famous works that is still very loved by many fans over the world, Wedding Peach.

Yazawa-Sensei: It is not my original, as you know, I have Sukehiro Tomita, he created original concept and Kazuko Tadano designed characters. Her design is sort of proto-tpy (very anime), so I gave some changes for Manga (Discussed it with my editor and chief editor). Momoko’s painted hair (black hair), school uniform were done with strong insistence by Chao’s chief editor, for instance. (I wasn’t completed agree with it, though. lol) The visual appearance was based on Kazuko Tadano’s work, and basic concept had done by Sukehiro Tomita. But I interpreted them to move them as my characters. I think during my interpretation, the concept would have been changed.

The concept is flowers, frills, dresses and young girls – so I checked many magazines for young girls and Wedding. Since it was a total unfamiliar field to me. My editor gave me “Bridal” Magazines.

2.  In your opinion what makes the Wedding Peach girls stand out in the world of shojo heroines?

Yazawa-Sensei: We didn’t try to be any specific. At least I didn’t. The three (4) characters are typical anime-shojo group characters, especially Momoko. No ordinary girl but very typical anime girl. I wanted to put weight on story/character part, that what I cared. If a girl fell in love with someone, there must be a reason. Not because he is good looking, not because he is smart, nor “destiny” person. There must be something special. It might make Wedding Peach different from others.

Wedding Peach is Magical fighting girls story, so there are enemies, there is fight, save something and so on…but I tried to describe characters personality and the process how it’s going to change, especially building relationship. If this part could have got fans attention, I’m pretty happy.

3.  Many fans wanted to know why the anime story ended after the 4th episode of Wedding Peach DX even if it seemed like an open ending.

Yazawa-Sensei: Just because of commercial reason, budget. It’s not sold well enough to continue. The producer had tried, he said to me and was planning but he couldn’t.

4.  Wedding Peach celebrated its 20th anniversary and many fans are hoping for a remake, continuation or new merchandise. But until now, nothing’s been announced. Do you think there could be a chance for something like that or should the fans enjoy the already existing story?

Yazawa-Sensei: Again, simply commercial reason. Not enough fans voice to make new series, unfortunately. KSS got in charge for the anime making, but the company got bankrupt and there is no more. It might be one reason why it’s hard to make sequence. (I don’t know, though)

For some reason, the series got popular in Germany and Korea – especially in Korea. Some new merchandise were released there, such as smartphone cases… etc.

5.  Ai Tenshi Densetsu Wedding Peach was transformed into an animated series. Were you happy about the way the anime turned out or would you have changed anything?

Yazawa-Sensei: Wedding Peach was a so-called “media mix project”. Anime was the plan from the first, but it was hard (We had problems to get a toy company sponsor) and we were almost giving up – it was almost the last minutes all problems were cleared. Yes, we were so happy and so busy because of it.

Because Anime and Manga walked different ways, I enjoyed the anime a lot. I’m not sure but might have got some ideas from the anime.

It has set me free – in a way. Tomita was a chief scenario writer of anime, and it kept him busy, he stopped to write manga story – withdrew manga team and concentrated on the anime. I had been already free, gave a lot changes to story Tomita did, but after the anime had started, both of us had worked individually.

We want to thank you again for your time and patience and hope to see more of your beautiful work in the future.